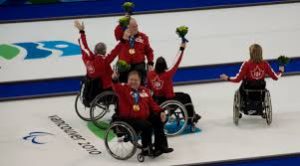 The team scored a 10-2 win over Sweden at the Gangneung Curling Centre.

Team USA scored in the first four ends to get the team’s first win after two losses to start the 11-game round robin.

The U.S. led 4-0 after a missed takeout by Sweden with the final stone of the second end.

The United States team will return to the ice at 2:35 p.m. Monday to take on Finland (3-0) and then in a competition slated for Monday night the Americans will face the Neutral Paralympic Athletes (1-2). The Paralympics in Korea will take place from March 9 to 18.

According to USA Paralympics, The PyeongChang 2018 Paralympic Winter Games will will feature up to 670 athletes, a 24 percent increase on the 539 athletes that competed at Sochi 2014.

The number includes a 44 percent increase in the number of female athletes competing compared to Sochi.

As part of hosting the Games, the PyeongChang 2018 Organizing Committee has launched “Actualizing the Dream,” a project aimed at promoting Paralympic winter sports, raising awareness of Para sport and its athletes, and securing the social inclusion of people with an impairment.

The official mascot of the PyeongChang 2018 Paralympic Winter Games is “Bandabi,” an Asiatic black bear, founded on South Korea’s mythology and closely associated with Korean culture and folklore.

The bear is symbolic of strong will and courage. The Asiatic Black Bear is also the symbol animal of Gangwon Province. In the name “Bandabi,” “banda” comes from “bandal” meaning “half-moon”, indicating the white crescent on the chest of the Asiatic Black Bear, and “bi” has the meaning of celebrating the Games.