Teen has trouble when airplane ramp is delayed

The best portable wheelchair makes travel easier for people with disabilities.But a Virginia family that has recently had difficulty traveling through Charlotte-Douglas Airport in North Carolina is considering whether to take legal action against the airport or American Airlines because of a lack of accessibility when it came to exiting a plane. 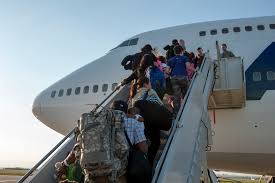 Although he is able to walk, fifteen-year-old Seph Ware often uses a wheelchair or power chair because he has muscular dystrophy, a degenerative disease that causes progressive weakness and loss

Ware and his mother, Lori Watkins, traveled to Charlotte from their home in Lynchburg, Virginia several times. But they have found recently that in order to disembark from their flight, they have to use stairs. Because they are flying from a small airport to a much larger one, their plane is emptied onto the tarmac and not directly into the terminal via a walkway, WBTV reported.

Although the family asks in advance for the airline or airport to provide a ramp, there is not always one available when they land. That was the case when the family traveled through the Charlotte airport last week, Watkins said. The family said they waited 10 to 15 minutes for workers to bring a ramp but felt they needed to get off the plane so they would not miss their next flight. That made it necessary for Ware to sit and boost himself down each of the stairs in a sitting position.

Watkins said that deplaning in this manner could cause her son harm because his medical issues include the beginning stages of osteoporosis.

Ware said it was the fourth time that it was necessary for him to exit a plane that way, and that it was humiliating.

Each time was on an American Airlines flight from Virginia to Charlotte, the family told the T.V. news crew.

American Airlines told WBTV the airline takes the situation “very seriously” and makes “every effort to accommodate all of our passengers.”

The airline said in the most recent incident, since the flight arrived early, the ramp team was not ready when the plane arrived but that the ramp was there before the scheduled arrival time. The airline said it is “working with our vendors and regional partners to ensure we follow up on this issue and are in contact directly with the customer.”