Several protesters in wheelchairs were removed from a room in the United States Capitol last week after they interrupted a hearing in the House Rules Committee to protest reforms to the Americans with Disabilities Act. 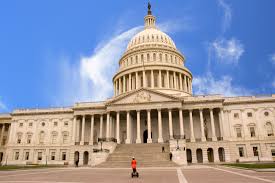 The protesters object to the ADA Education and Reform Act, which would require individuals claiming disability-related discrimination to notify companies in writing, with new correspondence and response times attached.

Business Insider reported that some protesters who require wheelchairs were forcibly removed from the hearing room. Demonstrators chanted as law-enforcement officers dragged them out.

One woman was told she would be charged with resisting arrest if she didn’t move her manual wheelchair out of the way, although her hands were tied together, making her unable to move her chair.

U.S. Capitol police spokeswoman Eva Malecki said in a statement that Police arrested 10 individuals for unlawfully demonstrating in the U.S. Capitol Building, and that they were charged with violating and ordinance against crowding, obstructing or incommoding.”

The Americans with Disabilities Act (ADA) was signed into law by President George H.W. Bush on July 26, 1990. The law prohibits discrimination and guarantees that people with disabilities have the same opportunities as everyone else to participate in the mainstream, including employment opportunities, purchasing goods and services, and participating in government programs and services.

The ADA is an equal opportunity law for people with disabilities. The legislation was modeled after the Civil Rights Act of 1964, which prohibits discrimination on the basis of race, color, religion, sex, or national origin.

To be protected by the ADA, an individual must have a physical or mental impairment that substantially limits one or more major life activities or history or record of such an impairment. The ADA does not specifically name all of the impairments that are covered.

Intellichair sells portable wheelchairs that give people with disabilities the mobility that helps them live in the mainstream of American society. For more information about the best motorized wheelchair, visit the Intellichair website.