Using a Motorized Wheelchair to get from place to place definitely makes life easier for people with disabilities. But one man who lost a leg in an accident is making his way 700 miles traveling in a regular wheelchair to raise awareness and to raise money for charity. 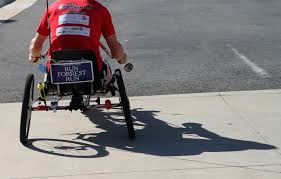 Dennis Schulze, a native of Beloit, Wisconsin, is traveling from Radcliff, Kentucky to Houston, Texas, in a wheelchair on what he calls his “Handshake Journey.” Schulze, 55, lost his right leg after he was injured when he was in an accident while driving a semi-truck. The injury led to the amputation of his leg above the knee. He hopes to show on his trip that people are really good at heart and will help people in need, MSN News reported. He plans to take a picture with every person who helps him on his journey and ask them to sign a banner he’s carrying.

In 2016, the lifelong Chicago Cubs fan traveled from Beloit, Wisconsin to the Cubs’ Wrigley Field to raise money for charities including one for cancer, the disease that killed his mother; one for Alzheimer’s disease, which took his father; the March of Dimes; the Wounded Warrior Project; and a child abuse prevention charity, ABC 7 reported.

He was able to travel about 10 miles a day on that trip through slush and snow on that trip.