Handicapped Accessible Parks Ensure That All Kids Can Have Fun

Intellichair electric wheelchairs come in fun, bright colors that appeal to kids — because what kid doesn’t like fun?

Some Girl Scouts in Neosho, Missouri got behind the idea that every kid, including those with disabilities, deserves to have fun. They decided to raise money to equip their local park with a wheelchair accessible swing, the Joplin Globe reported. 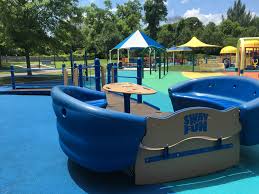 Girl Scout Troop 70098, based in Neosho, had already raised more than half of the funds needed to purchase the $2,000 swing when the local branch of  Southwest Missouri Bank offered to host a lemonade stand and match all of the funds the girls raised from the sale.

An earlier spaghetti dinner fundraiser raised more than $1,000 for the project.

“We are proud of these girls and the work they’ve put in to make this swing a reality in Neosho,” Jeff Maxwell, a vice president of the bank, told the Globe. “We wanted to help them reach their goal, which will, of course, help our entire community.”

Twelve-year-old Girl Scout Emily Barnhart thought of the idea and presented it to her troop members, who thought it was a great idea.

When the project is finished, Barnhart — who is at the Cadette level in the Girl Scouts — and some other girls in the troop will earn either a Silver or Bronze Award.

“We just wanted to help them get to their goal,” Fuller said. “We talked about it and thought these girls are really making a great effort here, and they’ve worked hard.”

The publication Special Education Degrees has a list of the top 30 handicapped-accessible play areas around the world, topped by Lake Charles, Louisiana’s Shiver Me Timbers Millennium Park at number one.

The park, originally unveiled in September 2000, was paid for by donors and was constructed by more than 6,000 volunteers. Although the play park was burnt to the ground in a suspected arson in January 2011, the community rallied together and rebuilt it in time for Christmas the same year.

The rebuilt park was made of plastic rather than wood. The new, 20,000-square-foot playground is twice the size of its predecessor and includes a 40-foot pirate ship, an adaptive swing, and the standout Crying Eagles Nest Treehouse – which, like the other big structures, is wheelchair accessible.