The best motorized wheelchair opens up travel options for the disabled, but some paralyzed and disabled veterans are suing the Department of Transportation because they say their wheelchairs have been lost or damaged by airlines, military.com reported. 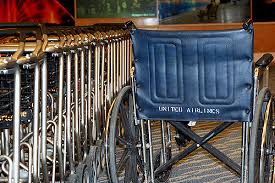 Senator Tammy Duckworth of Illinois, a retired Army lieutenant colonel and helicopter pilot who lost her legs in Iraq in 2004.

Duckworth had her wheelchair collapse underneath her because it had been damaged during a flight. She described the incident in a 2017 letter to Transportation Secretary Elaine Chao.

“On a recent trip, I retrieved my wheelchair at the end of the jet bridge, but a titanium rod had been damaged during the flight and my chair literally broke apart while I was sitting in it,” she said. “In the past year, I have had my personal wheelchair mishandled and damaged several times. I have spent hours filling out paperwork and working with the carrier to replace damaged parts.”

Representative Jim Langevin of Rhode Island, who is a quadriplegic, introduced a bill earlier this year to amend laws that prohibit discrimination against disabled travelers.

“Despite three decades of progress, I know firsthand the challenges of airplane travel for someone with a disability,” he said in a statement. “This bill will promote inclusivity by making substantial improvements in ticketing, passenger assistance, and airplane accessibility and accommodation.”

The Paralyzed Veterans of America (PVA) has filed two lawsuits asking the Department of Transportation to adopt new rules on air travel for the disabled.

One suit focuses on the handling and storage of wheelchairs in cargo bays while the other seeks to improve access to airplane bathrooms.

Hot Air Balloon Takes Wheelchair Riders Up In The Air