A motorized electric wheelchair like the Intellichair Modo Chair XL that comes in colors like pink, yellow, blue, red, black and silver could be thought of as an accessory, one that expresses the personality of the user.

It sometimes can be difficult for people with disabilities to find clothing and Accessories that help them express their fashion sense while still being easy to put on. But more fashion retailers are recognizing this unmet need and developing accessible clothing lines. 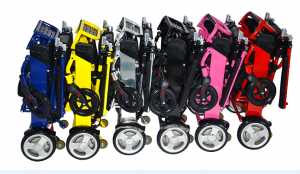 British retailer ASOS is one of the companies that has recently joined the retailers creating inclusive fashion for people who use wheelchairs.

ASOS has released a waterproof jumpsuit made specifically with wheelchair users in mind, Insider reported.

BBC reporter and para-athlete Chloe Ball Hopkins consulted with the company to help them understand the special clothing needs of people who use wheelchairs. She suggested a waterproof jumpsuit after getting caught in the rain during an outdoor festival.

In an interview with the BBC News show Victoria Derbyshire, Ball-Hopkins, who uses a wheelchair, said,

“There’s a lot of people like myself who, in a chair, you get cold very easily, and water and rain definitely doesn’t help that. And you’ve got a lap that can get wet too — I think people forget that,” she said. “At the end of the day, I was, like, ‘I need to do something.’”

The jumpsuit has adjustable cuffs and a zipper around the waist that makes it easier to put on and take off.

After the jumpsuit was unveiled, the company was praised on Twitter for being inclusive.

Target consulted disability nonprofits, customers and employees to find out what kinds of features were important to people with disabilities.

“You don’t know what others need until you really build that empathy,” Julie Guggemos, head of product design at Target, told Marketplace.

Target adapted versions of its best-sellers rather than coming up with a whole new adaptive line.